Recently, Emily Parkhurst and her colleagues at the Puget Sound Business Journal have published a series of articles on Depression in the Technology industry including an article that went to print on titled “Tech’s dark secret: Depression in the startup community.” This is a topic I’ve grown to be incredibly passionate about, mainly because of the pain of the crucible I experienced throughout 2013. 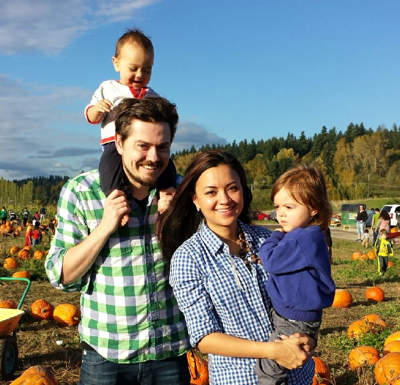 Having emerged from that dark period of my life and ultimately finding myself enjoying life more than at any point in my adulthood, Emily’s stories moved me. I’ve been there. I know that pain. Now I want to help…

Recently, Emily published my story: “Being a startup founder is one of the most lonely jobs:’ Blue Box CTO on his struggle with depression.” Emily did a phenomenal job capturing the challenges of the ride I experienced following our Series A investment in October of 2012. However, after reading her summary, I felt like something was missing. Dark times for an entrepreneur can be numerous, and so learning how to survive those experiences becomes absolutely critical. Even so, the technology and startup communities have shied away from this conversation for so many reasons.

With that in mind, I wanted to the opportunity to talk about the tools I discovered to weather my storm. My story isn’t unique, but I am uniquely willing to talk about it. My hope is that these experiences can help others going through similar challenges. I write this knowing that a resource like this would have made such a huge impact on my life only two short years ago.

I’ve been on my journey at Blue Box for what in the startup world can be considered an eternity: August of 2015 will mark my twelfth year at Blue Box. After founding the company from my dorm room at the University of Puget Sound, I bootstrapped what would become a managed hosting company for nine years. In 2011, I made the difficult decision that the business plan and path I had led the company down was not ultimately where the organization could find its greatest success and I decided to pivot the company and raise external capital to help fund our next chapter. 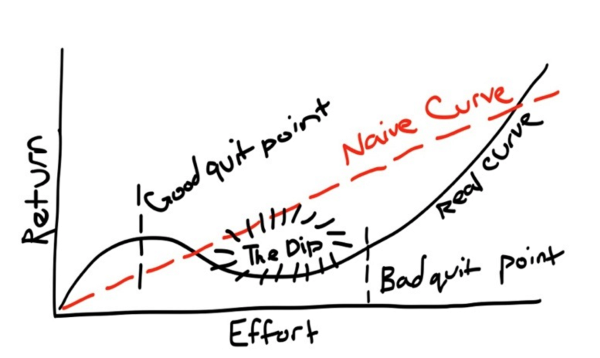 A great friend of mine, Kabir Shahani, presented the keynote at the University of Washington Business Plan Competition dinner. In this keynote, Kabir presented a slide that I’ve poorly recreated above. His point was that often, entrepreneurs begin their journey by believing that for each unit of effort they apply to their business, they’ll see an equivalent amount of return. Yet what reality holds is the opposite of that: in many cases, the effort applied often results in a loss of return and a trough Kabir called “The Dip”.

Yet I’ve found after 11 years, that the reality of that effort to return equation often looks something more like this:

Throughout the history of Blue Box, I’ve experienced some of the most thrilling highs, and the lowest of lows. That goes with being an entrepreneur.

And yes, 2013 was a particularly shitty year. Arguably the shittiest year I had ever experienced. And yes, that left me wildly depressed. But I truly feel sharing the story of struggle and depression is only half the story. The other half, the arguably more important half, is how I managed to climb out of the darkest place I’ve ever been, back to a place where I couldn’t more excited to wake up every day and tackle new challenges.

Below, you’ll find a series of things that worked well for me. They won’t necessarily work well for every one, but my hope is that for others battling through similar challenges, these can act as a lighthouse — a beacon of hope for places to guide your ship…

I found a support network… I was fortunate enough to be introduced in 2010 to Entrepreneurs Organization (EO): a sort of AA for Entrepreneurs. Joining EO turned out to be one of the most pivotal decisions I’ve made in the last 5 years. Within EO, each member is assigned to a forum of about 9 other business owners. Each forum meets monthly and all content shared is completely confidential. Further, EO has adopted Gestalt communication, so members share their experiences over giving advice. The day I discovered a horrid truth that would change my path for 2013 happened to be the same day as my EO Forum meeting, and having that support network there with me as I processed the emotional torrent seething through my body was invaluable.

I found a professional… In addition to EO, very shortly after starting my emotional dive, I reached out to my Primary Care Physician, and then to a professional counselor. In addition to pursuing the tools available to me through modern medicine, I met with that counselor regularly for almost a year. Having a trained third party who could ultimately be a sounding board and could ask me really hard introspective questions proved to be incredibly helpful. During this time, external perspective helped me chart my own course through the obstacles I was facing.

I found a community… Through my social network at the time, I was able to identify a few close friends in whom I could confide about what was really happening. In my case, these were not only friends, but also fellow entrepreneurs whom had experienced their own sets of turmoil. Ultimately, these individuals really operated as sounding board. More recently, in the wake of some tragic losses in the technology community due to depression, more and more individuals are opening up their arms and their hearts to be available to those experiencing the lows that life so often likes to give us:

I became a much better communicator with my spouse… As Brad Feld notes in Startup Life, communication with our spouses can be one of the most challenging aspects of being in a relationship with an entrepreneur. I felt very lucky to find Brad’s book and be able to learn ways to communicate at home without shedding the weight of my struggle onto the shoulders of my family. Looking back through this period, I can see a remarkable change for the positive in how Rebecca and I communicate; a change I know helped me through this time.

I Read… In November of 2013, during the tail end of arguably the second lowest point for me that year, I was fortunate to read two books that had a profound impact on me. Both stories are about wildly successful individuals who both went to hell and back getting to where they were. But for me, their success was irrelevant. Through these narratives, I came to my first true realization that I wasn’t alone. That behind every successful startup lies years of blood, sweat and tears: years of turmoil and of near catastrophe. That simple fact — that others had been in these exact same situations — helped me push through.

I finally started taking care of myself… This one sounds like an obvious point, but for me, it was the first thing out the window. When I entered crisis mode, I literally fell apart. I stopped working out, I stopped sleeping, and I stopped eating well. All my waking moments when into figuring out how to save the business leaving literally no time for personal care. Those around me would constantly remind me to take the time for myself, and my gut reaction was always: “And where would you imagine I could find that time?” Yet the reality was that for every workout I skipped, every hour of sleep I postponed and every shitty meal I ate, I was only digging myself deeper and deeper into a hole. When I wasn’t physically feeling well, my chances of emotionally feeling well fell dramatically. I can trace back to the point where things really began to turn around for me to the point in time I finally started taking care of myself.

I got back to working on what I was passionate about… On the tail end of this process, I began to realize that while I had been successful as CEO for the first ten years of the business, the demands and skills required at the stage of company we collectively built were no longer of interest to me. Managing the board, fundraising and driving accountability in the organization were no longer things that fired me up in the morning. And so I made a difficult but ultimately incredibly rewarding decision: I decided to replace myself as CEO. I spent about five months talking with Matthew Schiltz before ultimately making the offer to invite him to join our wild ride. And almost a year later, I couldn’t be happier with this decision. With Matt aboard, I was able to pivot my attention and energy back into the things that I love: Technology, Architecture, Engineering and Evangelism. The company has been so much better off, and frankly, I’ve had the opportunity to learn from someone deeply skilled in this stage of an organization.

In Closing: The only failure is giving up…

A print out of this quote lives on my wall, given to me by a colleague of mine who understood the emotional turmoil we as founders go through on daily basis. This quote has guided me and inspired me time and time again when things slip back towards the challenging:

“It is not the critic who counts; not the man who points out how the strong man stumbled or where the doer of deeds could have done them better. The credit belongs to the man who is actually in the arena, whose face is marred by dust and sweat and blood; who strives valiantly; who errs and comes short again and again; who knows great enthusiasms, the great devotions; who spends himself in a worthy cause; who at the best, knows in the end the triumph of high achievement, and who, at the worst, if he fails, at least fails while daring greatly so that his place shall never be with those timid souls who neither know victory nor defeat.” — Theodore Roosevelt

The rise from from the depths of the ashes is a part of what makes the entrepreneurial life such a worthwhile experience, but it is only a worthwhile experience if you are present to witness it. The darkest times are the ones that ultimately define us. That’s the story I want to tell. While for some, their businesses may fail, and for others, they may find wild success, under both scenarios, there’s hope because there is a tomorrow.

One additional thought: If you live in the Northwest or Northeast, I would suggest researching Seasonal Affective Disorder SAD. I believe this can compound with the stresses of a startup and create a vicious cycle.

Jesse Proudman is the founder and CTO of Blue Box, an IBM Company
Note: This article originally appeared on Medium