So, I (am fairly certain) I have ADHD. Why? Because I started this blog post about 10 times over ~four~ five weeks and written already about five to ten or more THOUSAND words, some deleted, some living in the 3 different drafts some living only in my head. Today, I sat down at 13:30 to polish this and get something written. It’s now 15:30 and I am just starting. [1]

Of course, in all that time I could have even gotten help for the problem! Just find a doctor. Or as I take it:

So I don’t start. Because that seems like a lot of trouble and I’m okay-enough right now. Well usually. Unless I’m not, but I’m getting better at dealing with me. And at some point, I will take care of this. I’ll add it to my todo lists.

You see, ADHD isn’t—Hey look! A thing on reddit! That’s awesome! [2] It involves issues primarily with the regulatory functions of the brain. There is a lot more science on this if you’re interested, but the gist of it involves impulsivity and focus. And as every good action requires an opposite, the lack of attention comes also with a hyper-attention and difficulty self regulating… well, anything.

Co-morbid, then, with ADHD tends to be mood disorders, anxiety [3] and depression [4]. ADHD folks also tend to feel emotions DEEPLY and QUICKLY. When anyone else might feel excited, I tend to be over-the-moon; when you might be sad, I am devastated; and, more troublingly, when you get frustrated, I might be enraged. This gets me into trouble with my family, my work, and gets worse if I’m tired.

ADHDers also tend to get extremely passionate and fall heavily on the line of burning out rather than fading away. All of this hit me incredibly hard after organizing DevOpsDays Hartford just two weeks ago.

For a number of reasons all of which I could talk about for hours but don’t belong here, I am extremely passionate about DevOps and the DevOpsDays conferences. If you want impassioned conversation and don’t mind alternating blocks of text and multiple short messages. Sent just like this. One after another. Quickly. Find me on Twitter or wherever and we can have a great talk. So, organizing DevOpsDays Hartford was awesome and MCing the event was an inevitability. I poured myself into the event (hyperfocus, remember?) and completely disregarded self care and balance.

The event went REALLY WELL. I’m so happy I can’t begin to describe it, so none of this has to do with negative public outcomes, but afterward, I got wrecked. When I was “on” I was connected, talking to people, navigating the crowd and day-of logistics, delegating, leading the crowd, and moving the event along. I mingled after each event connecting with folks and singing karaoke and meeting new people and I loved every minute of it.

The few days [5] after, I learned what people talk about when they talk about panic attacks or, my favorite real medical symptom, a sense of impending doom. It was fucking awful. The only way I can describe it in context is exactly like hitting a wall, or like a bad match. Bright spark, intense flame, then nothing. My chest was tight. I couldn’t talk to anyone, I couldn’t deal with my kids or my family. By 8:30 I had been up for about 30 minutes and retreated back to my bedroom so I could breath normally. I could not function. I became physically ill and couldn’t eat well; who knows if that is related, but it really doesn’t matter. 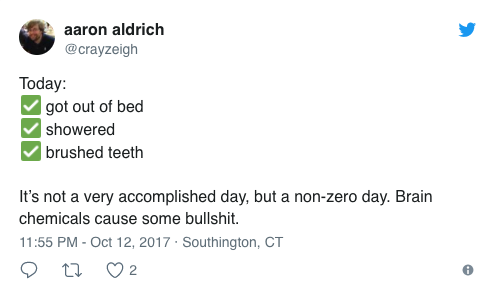 Because that was all of the energy I had that day, but I did something. That’s a resolution I’ve made to get through some of this. No Zero days. [6] Prove to the world you exist, if only by the hot water heater turning on for you, or the use of just so much toothpaste.

This is kind of, like, the thing though, you know? Breaking grand schemes down into smaller goals, Minimum Viable Products—just the basics of what you need to consider the product functional—in the case of software release cycles. Then you take those and break the tasks down further until you get single, accomplishable tasks.

The general idea being, of course, it’s hard to imagine where to start building a car, but easier to wrap your head around getting a box to roll down hill and easier still to just find wheels. Any time you find a task hard to wrap your head around, you break it into smaller steps. So October 13th I had what felt like uncountable tasks on my todo lists [7] between job hunting, wrapping up DevOpsDays, regular job things, family, like a true white suburbanite, I literally could not even. And I spent a lot of time cannotting even. Until I could break the tasks down, pivot, and redefine success.

“I need to do $listOf1000Things—”
STOP
“Ok one thing. I need to accomplish X today. But X involves $listOf1000things,
execute Feelings.Doom()”
STOP
“Maybe that’s too much. What do I have to do first? What’s the first thing I need? A place to work? where do I go? coffee—”
STOP
“Ok, not that. What’s first. Get up. I can do that. Get up.”
GOOD NEXT
“OK. Shower. I can do that. It’s basically just not falling down, but in water.”
GOOD NEXT
“Brush teeth. I may as well. I’m in the bathroom. I can do that.”
GOOD NEXT
“I’m exhausted. Everything feels like it’s breaking and I’m stuck in the middle just holding it together and I don’t know how to fix it. Everything is—”
STOP WHAT DO YOU NEED?
“I just need to not think about this.”
GOOD THAT’S OKAY
“Okay?”
YES
“It’s OK to just survive today?”
YES
“I can do that.”

Maybe that’s over narrating or playing with reality a bit, but it’s what it felt like. I had to take my successful day down from getting my career goals accomplished to getting out of bed. Just exist and not give up. And I did it. I was successful that day at not letting myself disappear into my own conditions. And that doesn’t quite communicate that it took me until about 16:00 to get up and get moving. Honestly the only reason I got out of bed was to avoid the Zero Day. And that goal I could manage.

Years ago I had other issues, months-long depression during which I dropped out of school twice because I didn’t know myself well enough or have the experience to know how to deal with this. And worse, I didn’t have what I gave myself this time around — permission to fail a task, while succeeding at still being me. That was my takeaway from this most recent issue. My self identity isn’t wrapped in whether or not I can complete work that day, and I have permission to focus on my own self if I need to.

But there’s still more than can be improved on, I haven’t internalized this behavior well enough that I caught it early on. I still sometimes let my emotions take me by surprise and then I regret how I take them out on others, but now I recognize that and can catch myself midway. Less damage is done, and I’m getting better at pattern recognition and iterating on my behaviors.

It’s a lot of self-administered Cognitive Behavioral Therapy (which ADHD symptoms tend to respond to very well, by the way) and it’s on my own terms and sometimes I don’t recognize that’s what it is and I’ve also started doing some levels of group-therapy-by-another-name [8] and it really helps. Because the goal isn’t to be good and perfect now, but to improve. If tomorrow is better than today, you’ve been successful. And if tomorrow is worse than today, you’ve learned about something new that doesn’t work, and you’ve been successful as long as you apply that knowledge and tomorrow’s tomorrow is better.

It’s cheesy, but I am my—and you probably are your—own biggest obstacle to every task. And the one that deserves the most attention. And surprisingly, applying good organizational practice and DevOps ideas to self improvement, works. That’s probably a bit backwards, but for someone who comes from and understands tech, this is how I got here.

I didn’t get the reason these concepts work in complex system architecture is because they work in humans. But understanding that Continuous Improvement, Blamelessness/Cognitive Safety, and MVP concepts work because of how they break complexity down into manageable chunks and enable learning. It applies far beyond the worlds of software delivery and maybe, at least, it can get you out of bed one day, and the next day you’re stuck, maybe a little sooner.

1: I did watch three quantum physics videos, two videos about the weirdsies of music science, one about emotional deregulation and ADHD and I spent the full length of this video (well except for the end bit where I got bored and just moved on) counting my score (about 250) to measure exactly how unofficially ADHD I am.

[2]: As a note, I went to reddit to look for a cool announcement to link, forgot why I was there and spent 10 minutes reading about a gay tortoise., went back to the post to remember why I left in the first place, flipped back to reddit, gave up and just wrote “a thing on reddit” calling it close enough.

[3]: How will people take this? Will it turn out ok? What if this happens? What if this doesn’t happen? What did I say there? Did I really say “x”? Oh God, everyone must hate me! I’m awful, what am I going to do! Just get up now… now. NOW! I’m still laying down. I am going to fail…

[4]: Remember hyperfocus? Imagine focusing only on one bad thing you did for approximately forever until all you want to do is disappear. Obsessing over every awful decision you’ve ever made.

[6]: For true credit I probably saw this on reddit someplace, you’ll have to do your own looking, but I’m not taking credit for this as original thought.

[7]: By the way, also an ADHD thing, I have lots of todos, it always grows, it’s hard to check things off. Sometimes I add things I’ve already done just so I can feel good about doing something. Sometimes those things are “wake up” and “eat”.

[8]: Which, by the way, is basically a safe space to f—— up and discuss your failures. Why did I think that was a weakness?! It is a direct analog to testing and postmortems and it’s incredibly short sighted to think I could operate in production without that, but that’s probably a whole other discussion.

Aaron Aldrich is a Prompt speaker and kindly shared the story of his struggles with ADHD with us.